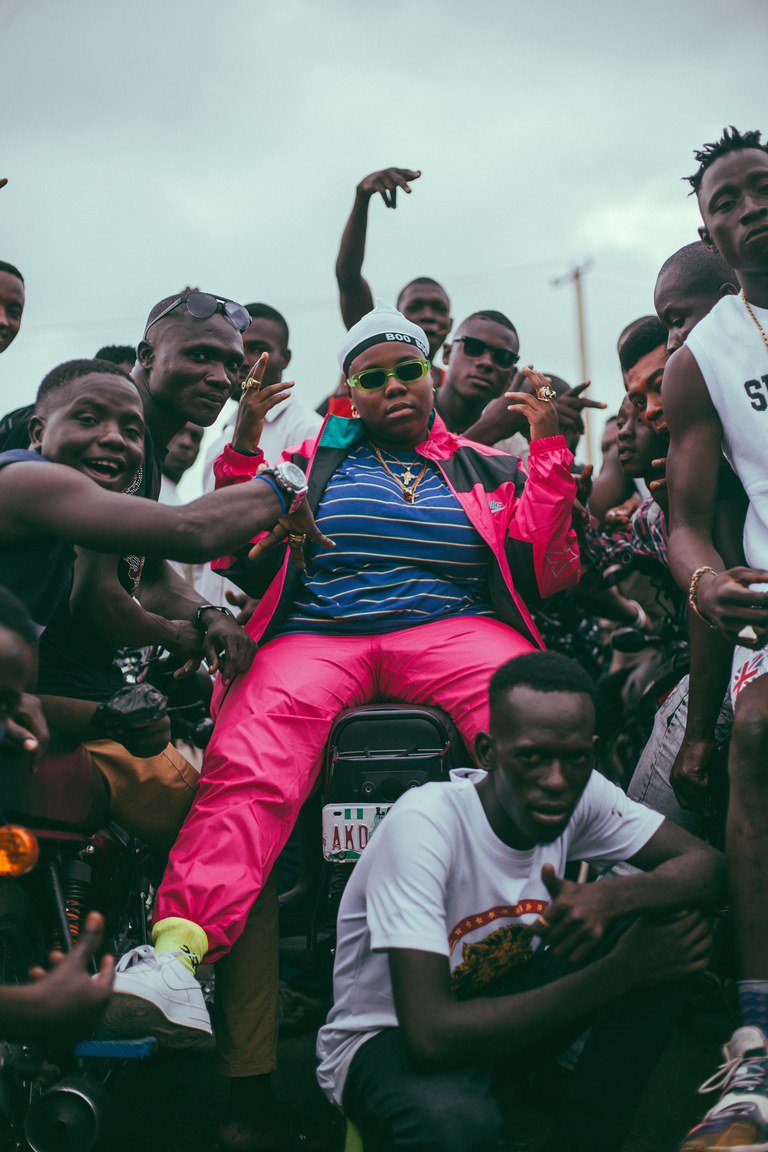 Teniola Apata is known as Teni the Entertainer to her fans, though her latest song suggests the Nigerian singer might be toying with a cheeky new moniker. Teasers for her upcoming “Sugar Mummy” video are all over her Instagram account, each one more audacious than the next. There she is, decked out in traditional Nigerian pink lace, a bedazzled fascinator perched atop her signature durag like a crown. Another clip features Apata casually swinging off the side of one of Lagos’s distinctive yellow danfo buses, dressed in a black T-shirt, jeans, and a towering cobalt blue headwrap, or gele. The aesthetic lies somewhere between streetwise cool kid and soigné West African auntie, and somehow hits just the right note.

“I want to make ‘Sugar Mummy’ a positive term,” she says in hushed tones that belie her rambunctious alter ego. “She is a woman with swag, who looks good, who is proud to be different.” Apata easily ticked all those boxes with her rousing headlining performance at Homecoming, the annual three-day festival thrown by British-Nigerian music maven Grace Ladoja last week. Less than 48 hours later, she’s still basking in the afterglow, lounging at a hotel bar overlooking the Lagos Lagoon. “The first time I met Skepta was on that stage,” she says with a wide fangirl grin. “It was pure amazingness!”

In a scene largely dominated by braggadocious men, Apata presents a refreshing counterpoint. Where other Afrobeat stars are infusing their sound with international flavors—Caribbean soca or Southern trap, for example—the singer is among a burgeoning new wave of artists mining Nigeria’s rich musical past. “Fargin,” the breakout hit that put Apata on the map (she was signed after the Instagram video of her singing it went viral), draws on the spirited melodies of ’70s and ’80s fuji and juju legends such as King Sunny Ade, Ebenezer Obey, and King Wasiu Ayinde. And yet there is a decidedly pointed message simmering beneath the song’s lilting harmonies. Switching between Yoruba, pidgin, and English, Apata calls out lecherous “uncles” who prey on young women, exposing hypermasculine posturing with incisive wit.

“There’s an assumption that women have to look a certain way to be feminine, but I don’t want to conform to that stereotype,” she says. “My thing is this: You don’t get to decide how I choose to live my life. I’m being me—respect that.” Born into a family of strong, independent women (her sister Niniola Apata is also a successful solo artist), the 26-year-old enjoyed a relatively sheltered existence in a middle-class enclave of Lagos before moving to Atlanta for college in her late teens. “UGA, the university I went to, was mostly PWI—that’s short for a predominantly white institution,” she says. “I remember someone even asked me if I had elephants in my backyard, it was wild. The other students would look at me crazy when I showed up to class in traditional dress, too. But you know that’s who I am. That’s my culture. If you can wear your blue jeans, I can wear this.”

If there is one thing she picked up from her time in the States, it’s an obsession with sneaker culture. Today she is wearing what has become her de facto off-duty uniform—a retro Nike tracksuit in retina-searing neon pink, lime green sunglasses, and sparkling white Air Force 1s, one pair in a collection of more than 150 kicks. “These are not as fresh as I’d like to be,” she says, looking down at her feet with a sigh. “I’ve already worn them about three times.” The singer’s personal style bears all the same effervescent hallmarks as her songwriting: It’s unapologetically colorful, irreverent, and cool. In her closet, cartoon merch (think, Krusty the Clown and SpongeBob shirts) happily coexists with locally tailored Ankara print pants. Though collecting sneakers might be a guilty pleasure, Apata isn’t the kind to splash out on designer labels. “There was a time when I wasn’t able to afford nice things, but even now that I can, being flashy in that way doesn’t sit well with me,” she says. “I don’t want people breaking their backs to impress others with material things because they saw me do that.”


With an Instagram following that’s more than a million strong, Apata isn’t taking her influence for granted. As much as she gets a kick out of hearing people all over the world (she has a particularly loyal fan base in Poland, of all places) sing all the words to “Sugar Mummy,” ultimately connecting with people on a human level is what matters most. Apata was reminded of this last year when a direct message landed in her in-box that was too urgent to ignore. “This girl was on the verge of committing suicide, so I immediately got her number and reached out to her,” she says. “She explained that watching my funny Instagram videos had kept her going. It was in that moment that I realized how powerful my influence can be. If I can be a source of hope and joy to somebody, then I’m doing something right.”

Advertisement. Scroll to continue reading.
In this article:Celebrity, Entertainment, fashion