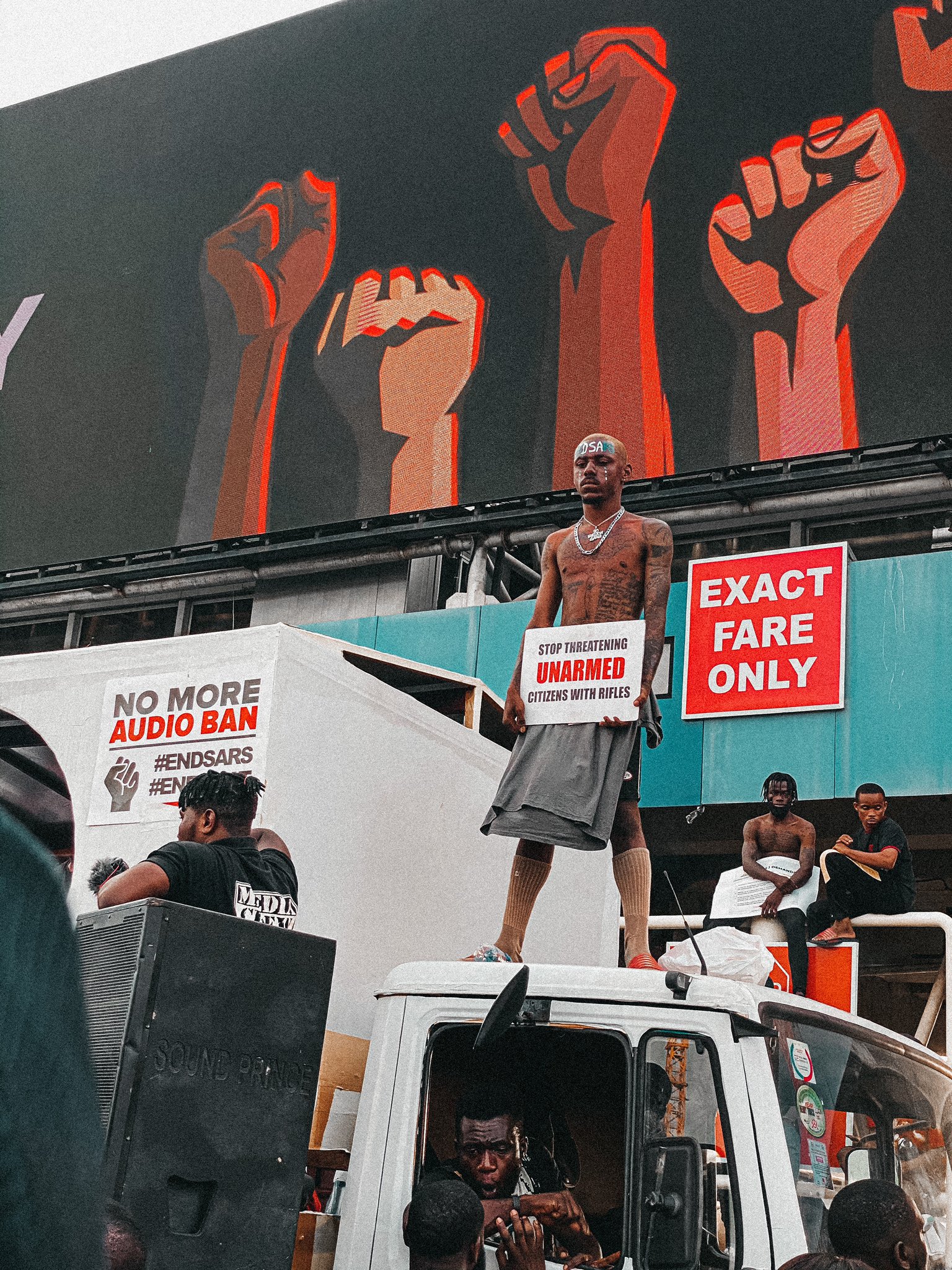 On October 6, Nigerians gathered in mass to protest the alleged murders, rape, and assault by a special unit of the Nigerian police known as the Special Anti-Robbery Squad, aka SARS. In the following days, protests spread to every major city in Nigeria as well as in Toronto, New York; Pretoria, South Africa; London, Berlin, and Geneva among others.

SARS, created in 1992, is the unit of the Nigerian police that was supposed to be in charge of robberies, kidnapping, and other violent crimes. Instead, it has been accused of using its position to extort, rob, defraud, injure, and even kill people. Before now, there have been attempts to advocate against SARS, but nothing on a global level.

Between January 2017 and May 2020, Amnesty International recorded at least 82 cases of “torture, ill treatment and extra-judicial execution” at the hands of SARS agents.

“This one we know falls solely on us. It’s our fight,” Afro-Fusion singer Omah Lay tells Teen Vogue. “The police hardly harass the elderly, but once they sight a young man and you maybe have dreads, piercings, or tattoos, you are automatically a ‘yahoo boy.’ They’d stop at nothing.”

Remembering those who were unjustly killed. ⚘ pic.twitter.com/6ZYTfzKE58

The initial demand from youth organizers — who have by and large been leading the movement — was to abolish SARS. By October 11, after worldwide protests, the Inspector General of Police Mohammed Adamu announced in a statement that the unit will be dissolved. But the police reassigned the same officers who were previously in SARS to other departments within law enforcement, thus avoiding the overall issue of excessive force. A new unit ironically named Special Weapons And Tactics (SWAT) was created to replace SARS and will reportedly carry out SARS’s duties.

To date, the #EndSARS movement is the largest organization that has been carried out in Nigeria in recent years. In the past few weeks, thousands of young Nigerians took to the streets with some staging sit-ins and even sleeping in the streets overnight. Protestors blocked major roads leading to airports and interstate highways, which forced a statement from the Lagos State Government.

Young Nigerian artists especially are using their influence to mobilize and advocate for the abolishment of SARS. Oxlade, an Afrobeats musician, says he was injured during a peaceful protest. Even while hurt, he was still advocating for the release of arrested protesters, including his manager, Ojabodu Ademola

“Nigerian youth have been fearless and driven,” alternative artist Lady Donli tells Teen Vogue about the mass mobilization of young people. “Everyone is fed up and we’re all beginning to understand that the future can and should be ours. I’m just so in awe of how organized and efficient everything has been. It just shows me that I am part of the generation right now, generation talk and do.”

Feyikemi Abudu, host of I Said What I Said podcast, was organizing, fundraising, and fighting for the release of detained protesters. Feyikemi raised more than 10 million naira (about $25,000) to fund protests and has been at the forefront since day one. “Young Nigerians are taking their power back for the first time ever,” Feyikemi says. “We are using modern technological tools and crowdfunding to provide funds for health care, food, water first-responders, and to put public pressure on government individuals. We will not back down because this country is ours just as much as it belongs to others.”

Screenwriter and podcaster Jola Ayeye — who’s been vocal on social media about the injustices across the country — also says technology has been pivotal in galvanizing people across the globe. “The protests don’t just have an element of youth involvement, they are run by young people,” she says. “New technology plays a huge role in fundraising and dispersing, information sharing, brainstorming, and creating an atmosphere of solidarity. A lot of us are scared, but we come out or organize or lend our voices day after day because we see thousands of us are also putting ourselves on the frontline.”

Adding, “The environment the Nigerian government has created an atmosphere that keeps the protests going. High unemployment, universities are on strike, and people have been despondent for so long. We are working together regardless of tribe or religious affiliations, man. We have never done this before, our generation, and it’s glorious. I hope we maintain the zeal and collaboration and never, ever back down on anything, again.”

Transparency and non-traditional forms of organizing are widely being considered the reason why the movement took off so fast. One of the first protests was led by entertainer Debo Macaroni, but other public figures like journalist Kiki Mordi and musician Folarin “Falz” Falana encouraged individuals on social media to protest — with no self-interest or monopoly over who is leading the charge.

“In this fight, there are no celebrities,” Omah says. “We are all just young Nigerians and we are tired. This is the story of every young Nigerian, and you can tell from how no one seems to be backing down. We are making our voices heard in the most peaceful way possible.”

Omah Lay adds that being an artist also makes the role of law enforcement even more complicated. “As musicians, we are even more prone [to interacting with the police]. We move around at night a lot for shows, sometimes they recognize you,” he says. “How about the day I run into the ones that don’t recognize me? Sometimes we have to move with police escorts, not to deter robbers but to protect ourselves from police brutality.”

The unstated fact is that no one is above reproach and criticism within the #EndSARS movement. Holding people accountable for their words and actions regardless of their celebrity status has ensured that famous Nigerians are intentional with what they say and do. When popular Nigerian YouTuber Ronke Raji posted about #EndSARS on Instagram, she was accused of being performative, she was swiftly unfollowed by many and essentially de-platformed.

For many Nigerians, #EndSARS is the most important movement in the country right now. The success or failure of the movement is thought to determine whether or not a lot of people have a future. For many young Nigerians, ending excessive force is a life-or-death issue.

“The #EndSARS movement has been eye-opening, emotional, and revolutionary at the same time,” artist Àgbá tells Teen Vogue. “It’s so good to see how passionate we are, and it’s amazing how much energy we all are putting into this. I love it so much and I hope we all continue to put our all into the development of the nation.”